5-Point Likert Scale: The Key To Easily Understanding Your Audience

You want to understand what your audience feels. And if you don’t yet, you should, because a happy audience is a healthy business.

In the era of customer reviews and online forums, you can’t just throw money at ads and paint over your business’s misgivings. Customers today have the power to talk about your business to the worldwide audience — both positively and negatively. This power also extends to your workers, who have it in their hands to heighten — or tarnish — your reputation as a good employer.

So what’s a good way to ensure positive conversations are happening around your brand? You measure and act upon feedback data from both customers and employees.

And how can you collect that data? One way is by using 5-point Likert scales. In this article, we’ll cover what a Likert scale is, how they’re useful, and what to watch out for.

What is a Likert Scale?

During his thesis work at Columbia University, psychologist and educator Rensis Likert (LEE-kurt, not LIE-kurt) wanted to measure subjective psychological attitudes in a “scientific” way. In 1932, he would publish A Technique for the Measurement of Attitudes, where he described a system that did exactly that — Likert scales.

Understanding Likert scales is best done through an example. Here’s a questionnaire you might receive at any shop on any given day: 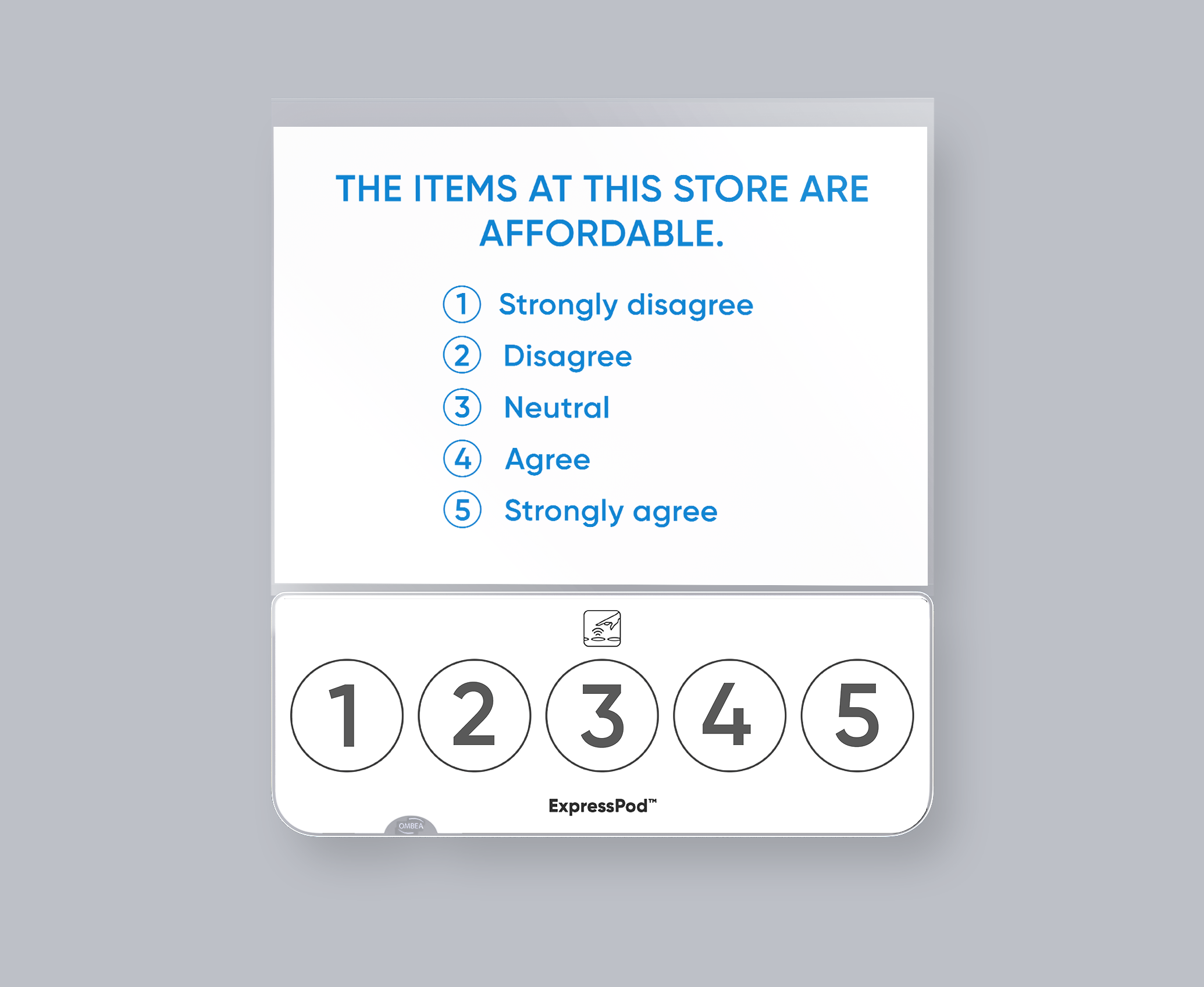 Let’s assume the survey is administered to two people, and they answered the following way:

With these answers, we can then derive a number that describes what these two customers feel about this shop. We can call this a sentiment score:

Step 1: For each question on the questionnaire, calculate the total number of responses for each sentiment level (Strongly Disagree, Disagree, Neutral, Agree, Strongly Agree).

Multiply the numerical value of each sentiment level by the amount of respondents. Let’s start with Question 1:

Step 2: Add the totals, and divide by the total number of respondents:

As the numerical value for the “Neutral” sentiment level is 3, this means that respondents generally feel neutral about item availability at the store.

We repeat steps 1 and 2 above for question 2:

And now for question 3:

If we calculate the average of the 3 questions, we get a sentiment score for the entire questionnaire:

Rounding down to 2, respondents to this questionnaire seem to have mildly negative attitudes towards their shopping experience at this particular store.

What did we do here? Just as Rensis Likert proposed, we assigned a numerical value to shoppers’ psychological attitudes towards a particular shop. More specifically, **we calculated a Likert scale (the entire questionnaire) based on three Likert items (each individual question).

Structure of a Likert Scale

What are the criteria that can help us differentiate Likert scales and items from Likert-type items and scales?

And how should a Likert item be structured? Here’s an example of a survey question that follows the canonical structure of a Likert item:

Now let’s explore the criteria that must be met in order to be considered a Likert Item.

There are many examples of vertical likert items, but a Likert item that follows the guidelines of the original 1932 publication has its items arranged horizontally. Although some concern has been raised regarding potential bias in horizontal Likert items, the effect is considered negligible.

Sentiment levels are assigned a representation of value.

Each sentiment level in a Likert item must be given a value to differentiate it from other sentiment levels. Put another way, it does not make sense to assign “1” to both “Agree” and “Disagree” because they don’t express the same emotion.

Sentiment levels have text-based descriptions (or graphical representations) that present logical graduation from one level to another.

The sentiment levels have to be different from each other. Also, this difference is expressed through words or through images. In classical Likert scales, descriptors such as “disagree” or “completely agree” were used to satisfy this requirement.

Today, one can also use an image that best conveys the sentiment level, which could be more appropriate depending on your audience (more on that later).

But there’s another condition that goes beyond how you present the information. It’s the difference in intensity between the emotions represented.

Take this Likert item, for example:

At first glance, this item looks like it’s emotionally symmetrical. Look closely, however. Is “Completely disagree” the total opposite of “Strongly Agree?”

How are likert scales useful?

Likert scales are useful when you want to quantify your target audience’s feelings towards an object, an idea or a phenomenon. Because the questions tend to be easy, many participants answer them, which creates an appropriate data sample. Quantifying feedback can come in handy, as you can compare against specific outcomes instead of elusive aspirations.

Think about this: you’re the customer experience manager for a retail store, and you’re about to have a progress meeting with your boss. What key point will impress them? Showing that customer experience went up from 6.2 to 8.1 last month? Or having a feeling that more shoppers were satisfied last month based on the general level of smiles you felt people had?

There’s a few things to have in mind before creating your first Likert scale.

You can choose between describing your sentiment levels through text or through images. Ultimately, which way you go depends on you, but consider both your audience and your context.

Who is your audience? Are they 4 year olds that barely understand the difference between right and wrong? Or are they employees at a Fortune 500 company?

Text-based descriptions may be misinterpreted by your audience, which leads to faulty data. Furthermore, your audience may have a different level of maturity and may not comprehend words that describe complex emotions. This is where picture-based labels come in handy.

On the other hand, text-based descriptions can add more depth than smileys or any image-type descriptor. What if you had to measure readers’ sentiments on whether or not your news publication was biased? Wouldn’t labels such as “very much biased” or “unbiased” be better to describe the sorts of answers you’re looking for?

A potential pitfall to watch out for in this step is acquiescence bias. Some sectors of the population, such as the elderly and immigrants, have undergone higher levels of institutionalization that encourage high desire to please. These people will favor positive answers to certain statements, even if they do not reflect their true attitude. In such a case, it may be best to use picture-based descriptors.

So now you’ve settled the matter of using text descriptions vs picture-based descriptions. Now it’s time to define the gradients between our sentiment levels. We previously discussed that Likert items needed to have symmetry. Your sentiment levels should present a gradual progression from negative opinions to positive opinions. However, how smooth you want to make that progression is up to you.

For example, should you include options such as “Not at all” or “Completely?” Or will you forego absolutes and instead include “very likely” and “very unlikely” at the edges of your sentiment levels? There is evidence to support that you should make your scales as moderate as possible. To avoid negative social labels, or to fall through the cracks of what is considered normal, respondents will gravitate towards the more neutral responses even if their attitudes are best reflected by the so-called “extremist” answer choices. This is an instance of what is called social desirability bias.

Now you’ve decided between text or pictures, and have clarified the progression your sentiment levels will have. So now the question is, do you need five sentiment levels?

The more sentiment levels you provide, the wider array of opinions you will get. If what you are trying to measure is a complex operation or service such as store experience or customer engagement, then you would probably benefit from adding as many ways for users to express their opinions as possible. If however, you’re seeking to measure users’ attitudes to bathroom cleanliness, then perhaps a smaller array of opinions suffices.

Adding more sentiment levels also avoid respondents from congregating in the middle options of your Likert scale. When presented with sentiment levels that don’t exactly describe their attitudes, respondents are more likely to indicate a middle option than leave the item in blank. By adding more possible answers, you increase the chances of capturing their true attitudes, avoiding distortions in data.

However, choosing more items has a trade-off. In today’s world, people have limited attention spans and free space in their memory. Studies indicate that our attention span reaches efficiency at six items at a time — any more than that and we just lose interest. Our immediate short-term memory is also capped at seven items. When evaluating possible sentiment levels, our mind can only consider seven of these at a time, which means that respondents have to invest significant time in recalling possible choices.

The evidence seems to indicate that five-point Likert scales ensure respondents won’t lose interest. Analyzing the different answer choices will also be easier for respondents, eliminating the urge to select middle options or leave items in blank. Furthermore, five sentiment levels provides a reasonable array of opinions that provide a rich understanding of attitudes towards the object or phenomenon you wish to evaluate.

To have, or not to have, a neutral option

Is it worth having a neutral button? That is up to you to decide. On the one hand, having a neutral button allows you to capture the sentiments of those respondents that truly feel neutral about the object or phenomenon you’re evaluating. However, providing a neutral option increases centrality bias, where respondents will gravitate towards central options when faced with socially unacceptable extremist options, or if their true sentiment isn’t in the Likert item.

However, not adding a neutral button brings its drawbacks. Not having a neutral button forces respondents to choose an answer, essentially forcing them to lie about their true attitudes when they might just feel neutral about it. In this case, they’ll optimize their answer to what they think the survey administrator wants to hear, which further contaminates the final data derived.