How To Respond To Public Reviews

95% of customers will read public reviews before making a purchase decision. Here’s how to respond to positive, negative and neutral reviews.

Think about this. Your car breaks down, so you take it to the mechanic. You start to get anxious. You know the mechanic’s going to try to sell you an (unnecessary) upgrade, or will arbitrarily set a price for the repair. How did he come up with that price? You don’t know.

You dread the look of “hey it ain’t my fault” he’ll give you when your car comes out worse than when it came in.

As it turns out, your experience was the exact opposite.

The moment you walked in, you were greeted with a smile. The mechanic then went over your vehicle and quickly identified the problem. He also spotted potential issues that if not addressed now could become bigger (and costlier). He didn’t push you on it, though.

After explaining the repair needed and informing you of the cost up-front, he gets to work and bids you a warm farewell.

Don’t you just feel the itch of telling someone how great an experience you had? How a traditionally uncomfortable experience actually turned out to be stellar?

You and the whole world feel this itch.

Every day, thousands of people publish online reviews for a variety of businesses. Whether an ode to a great experience or a scorching takedown, online reviews have become synonymous with word of mouth.

Why are online reviews important?

If you’re still not convinced about how important online reviews have become, here are some statistics that’ll make you think otherwise:

Why respond to reviews?

Now that you understand how online reviews translate into more traffic for your business, why should you respond to online reviews?

Right now, you probably don’t see the need of replying to someone who gave a 5-star rating. Ok, probably a “thank you” would suffice, but nothing more.

And you think it’s reasonable to avoid replying to a negative review. You’re not the type of person who gets into fights in the comments section on a website, so why should now be any different?

This is reasonable, logical thinking. But not replying to reviews means missing out on potential growth opportunities.

Again, here are some stats:

5 examples of responding to positive reviews

Now that we understand why responding to public reviews is important, let’s start by examining responses to positive reviews.

Positive experience at a florist shop 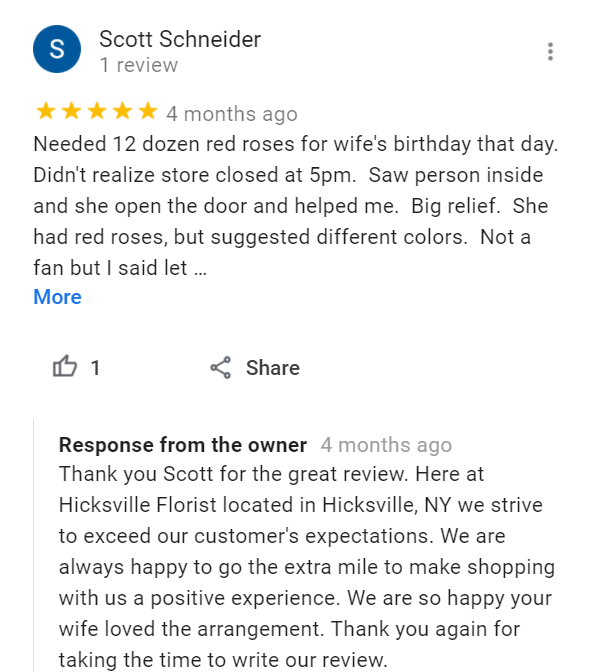 In the shop owner’s response, the business highlights their commitment to their customers. Furthemore, the shop uses the terms “Hicksville Florist” and “Florist located in Hicksville, NY.” As online reviews make 15% of SEO value, this would probably help with the store’s local SEO. They personalize their response by mentioning Scott’s wife, and round up by thanking Scott for his review.

Positive experience at a furniture store 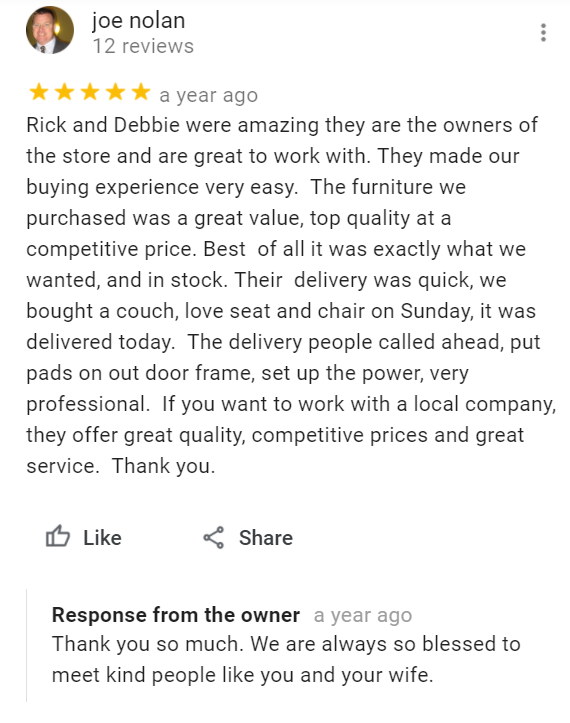 In their short reply, the owner thanks Joe for his kind words and appreciates meeting people like Joe and his wife. They don’t seem to use Joe’s name in their reply, missing a chance to personalize the response. The response doesn’t point back to specific elements of Joe’s comments like “local company” or “great quality.” To the observer, it may seem like a reply that could be given to almost anyone, no matter how much detail the review has.

Positive experience at a gas station 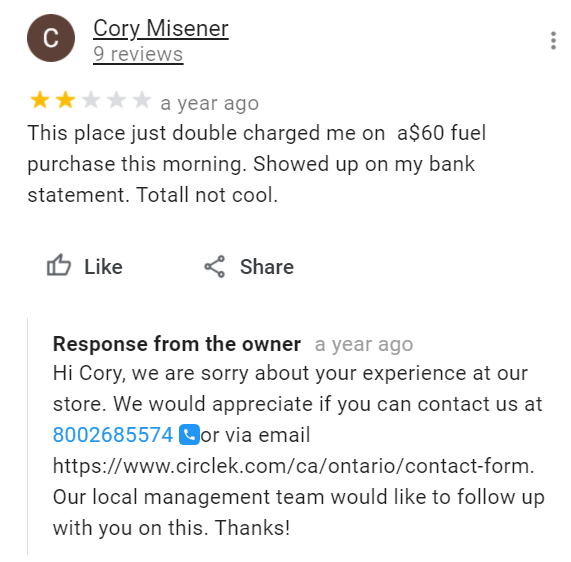 Similar to the above reply, this short review thanks Ted for the positive feedback, and invites him to come again. In this case, it seems like a short reply fits with Ted’s short comment.

Which of the two short responses do you think is best? The one for the furniture shop, or this one for the gas station?

Positive experience at a clothing store 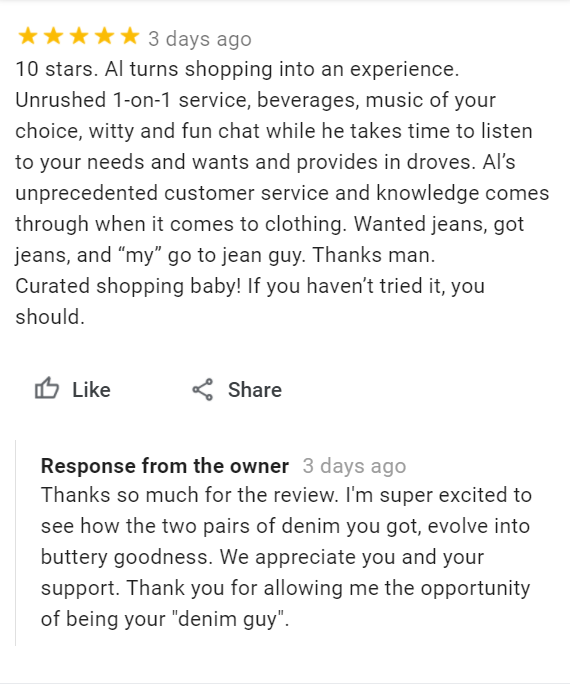 This response seems to be a great example of personalization. Already in the second sentence, the store owner references the interaction they had with the customer. They do this again in the last sentence, where the owner thanks the reviewer for making them their “denim guy.”

Positive experience at a car dealership 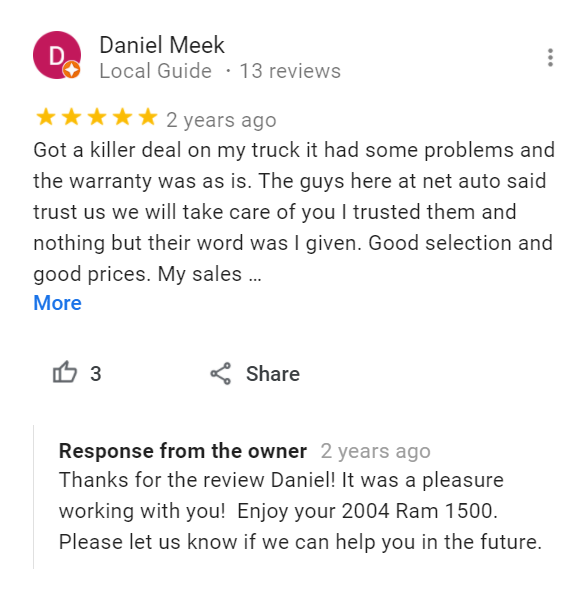 This response is a great example of using this space for SEO purposes. By referencing the make and model of the vehicle Daniel purchased, the response will boost the dealership’s rankings whenever someone looks to purchase that same vehicle.

5 examples of responding to negative reviews

Negative experience at a flower shop 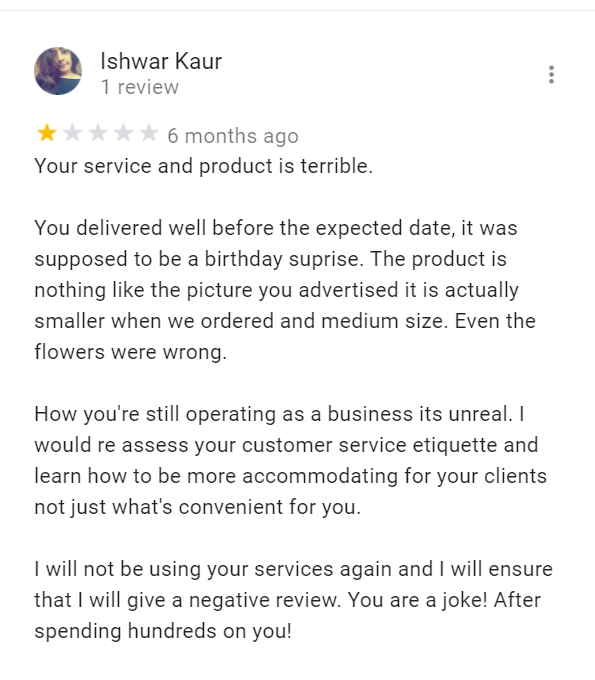 By the way the review is phrased, It would have been easy for this to escalate to something more negative. The reviewer uses descriptors like “terrible”, “unreal”, and “a joke”. This could be taken as a personal attack to the owner’s livelihood, and could have turned into a very public comments exchange.

Instead, the owner adopted a diplomatic approach. By asking Ishwar to call the store, the owner is opening a channel of communication which can either be accepted or rejected. This is also a way to move a potentially sensitive conversation offline, where it can be addressed one-on-one.

Negative experience at a supermarket 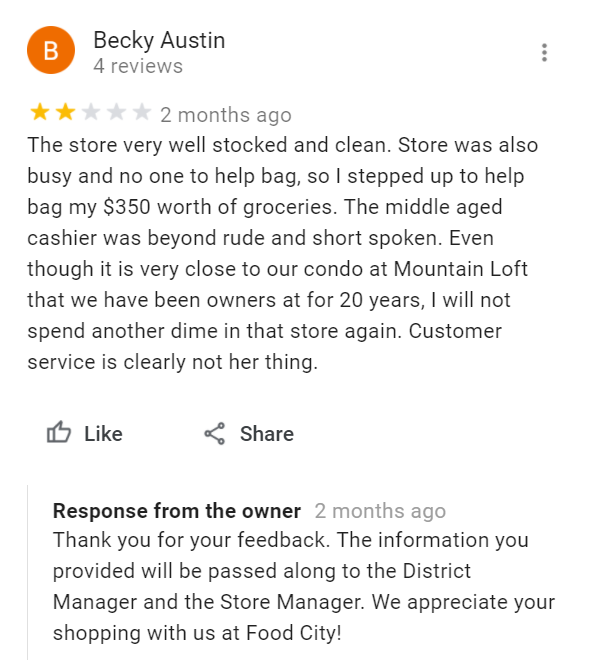 The response doesn’t seem to address the main points Becky complained about. In addition, the store doesn’t seem to apologize for how the customer is feeling. Furthermore, the response seems generic. It is devoid of any personalization, and could apply to just about any type of review.

Looking down at other reviews for the same store, we find that this response is either copy-pasted or automated in some way. 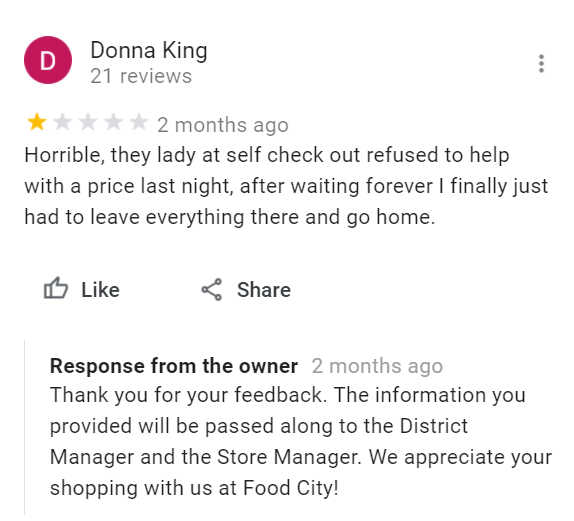 Negative experience at a furniture store 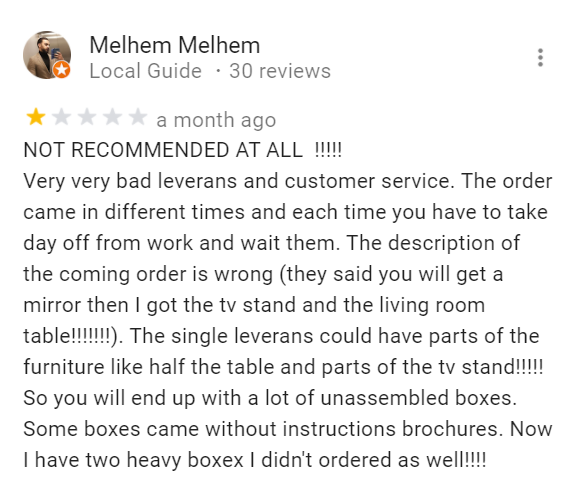 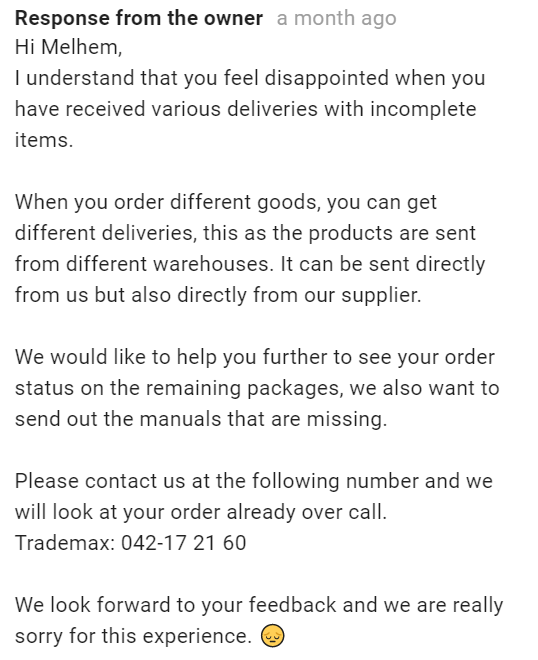 Melhem provides a detailed description of exactly what went wrong, and the personal circumstances that make this situation especially aggravating. In the response, the store apologizes for the inconvenience, and sympathizes with Mehlehm’s situation. After explaining their delivery method, the store invites Melhem to get in touch to resolve the issue over the phone, as well as provide the missing instruction manuals.

Negative review at a gas station 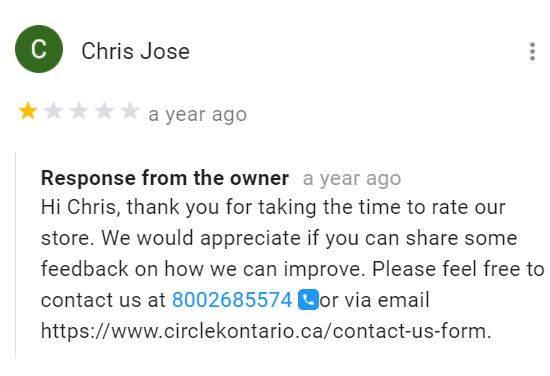 This can be frustrating. Not only is the review negative, it is also devoid of any explanation. It would have been easy to criticize the person publicly for leaving such a review, or accuse them of purposefully tarnishing the business's reputation. The chosen response seems more effective. Not only do they thank the reviewer for their time, they encourage them to have a conversation on what to improve.

Negative review at a car dealership 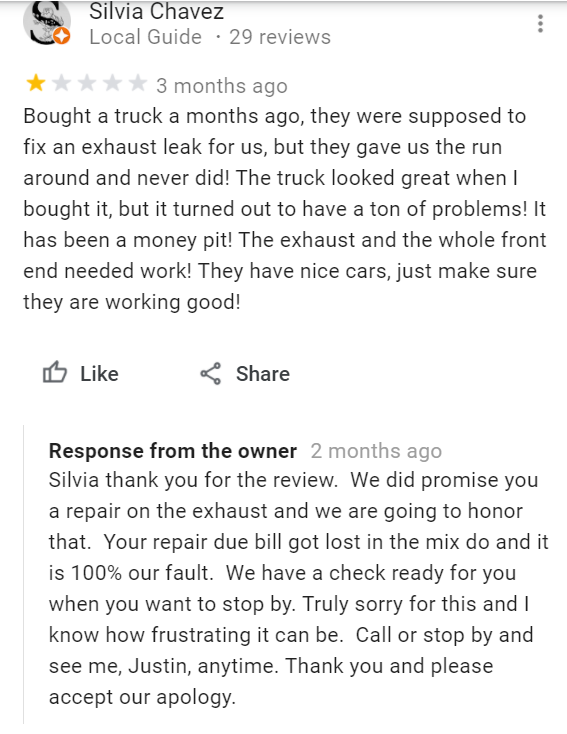 This looks like another example of a review that could have quickly escalated into a larger confrontation. Reading the review, it seems like Silvia is accusing the dealership of lying to her about the condition of the vehicle she purchased. Furthermore, she points out that the dealership failed to deliver on services promised. The dealership takes a diplomatic approach. They thank Silvia for bringing this to their attention, and recognize their failure. They further invite Silvia to get in touch with a real human, Justin, at a convenient time.

2 Examples of Responding to Neutral Reviews

In our experience, responding to neutral reviews can be more challenging than responding to positive or negative reviews. Many times, the reviewer does not specify why they left 3 stars instead of 4 or 5. When they do specify a specific grievance, they don’t give the necessary details to understand and address the situation.

Neutral review at a convenience store (No text on the review) 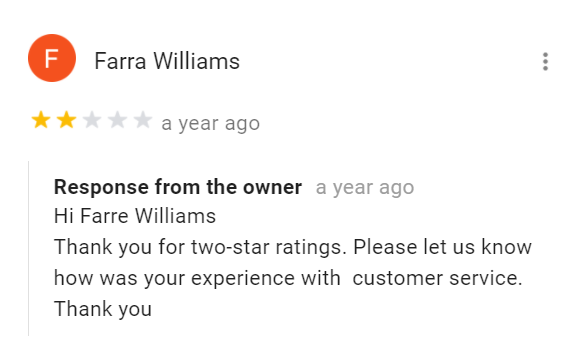 How frustrating. The reviewer leaves 2 out of 5 stars, but gives absolutely no explanation. The owner responds by thanking her for the review, and asking her to explain more about her interaction with the business.

Neutral review at a clothing store 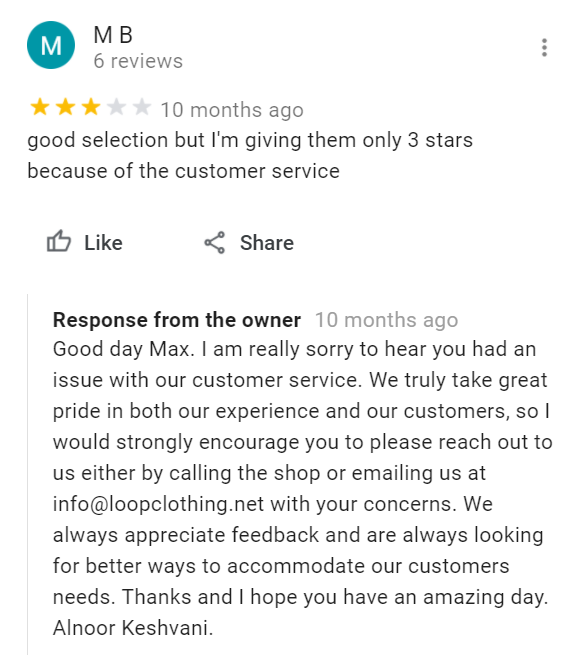 Worse than receiving no comments at all is receiving vague comments. This reviewer hints that there was an issue with customer service, but does not specify what. This can be a cause for frustration, as there is no clear opportunity for the business owner to turn the 3-star rating into a 5-star rating.

Having examined responses to positive, negative and neutral public reviews, we’ve seen how some responses are better than others.

Here are the key takeaways:

How will you use these takeaways to craft better responses to public reviews?